As a part of NASA’s overall planetary defense strategy, DART’s impact with the asteroid Dimorphos demonstrates a viable mitigation technique for protecting the planet from an Earth-bound asteroid or comet, if one were discovered.

“At its core, DART represents an unprecedented success for planetary defense, but it is also a mission of unity with a real benefit for all humanity,” said NASA Administrator Bill Nelson. “As NASA studies the cosmos and our home planet, we’re also working to protect that home, and this international collaboration turned science fiction into science fact, demonstrating one way to protect Earth.”

The mission’s one-way trip confirmed NASA can successfully navigate a spacecraft to intentionally collide with an asteroid to deflect it, a technique known as kinetic impact.

The investigation team will now observe Dimorphos using ground-based telescopes to confirm that DART’s impact altered the asteroid’s orbit around Didymos. Researchers expect the impact to shorten Dimorphos’ orbit by about 1%, or roughly 10 minutes; precisely measuring how much the asteroid was deflected is one of the primary purposes of the full-scale test.

“Planetary Defense is a globally unifying effort that affects everyone living on Earth,” said Thomas Zurbuchen, associate administrator for the Science Mission Directorate at NASA Headquarters in Washington. “Now we know we can aim a spacecraft with the precision needed to impact even a small body in space. Just a small change in its speed is all we need to make a significant difference in the path an asteroid travels.”

The spacecraft’s sole instrument, the Didymos Reconnaissance and Asteroid Camera for Optical navigation (DRACO), together with a sophisticated guidance, navigation and control system that works in tandem with Small-body Maneuvering Autonomous Real Time Navigation (SMART Nav) algorithms, enabled DART to identify and distinguish between the two asteroids, targeting the smaller body.

These systems guided the 1,260-pound (570-kilogram) box-shaped spacecraft through the final 56,000 miles (90,000 kilometers) of space into Dimorphos, intentionally crashing into it at roughly 14,000 miles (22,530 kilometers) per hour to slightly slow the asteroid’s orbital speed. DRACO’s final images, obtained by the spacecraft seconds before impact, revealed the surface of Dimorphos in close-up detail.

Fifteen days before impact, DART’s CubeSat companion Light Italian CubeSat for Imaging of Asteroids (LICIACube), provided by the Italian Space Agency, deployed from the spacecraft to capture images of DART’s impact and of the asteroid’s resulting cloud of ejected matter. In tandem with the images returned by DRACO, LICIACube’s images are intended to provide a view of the collision’s effects to help researchers better characterize the effectiveness of kinetic impact in deflecting an asteroid. Because LICIACube doesn’t carry a large antenna, images will be downlinked to Earth one by one in the coming weeks.

“DART’s success provides a significant addition to the essential toolbox we must have to protect Earth from a devastating impact by an asteroid,” said Lindley Johnson, NASA’s Planetary Defense Officer. “This demonstrates we are no longer powerless to prevent this type of natural disaster. Coupled with enhanced capabilities to accelerate finding the remaining hazardous asteroid population by our next Planetary Defense mission, the Near-Earth Object (NEO) Surveyor, a DART successor could provide what we need to save the day.”

With the asteroid pair within 7 million miles (11 million kilometers) of Earth, a global team is using dozens of telescopes stationed around the world and in space to observe the asteroid system. Over the coming weeks, they will characterize the ejecta produced and precisely measure Dimorphos’ orbital change to determine how effectively DART deflected the asteroid. The results will help validate and improve scientific computer models critical to predicting the effectiveness of this technique as a reliable method for asteroid deflection.

“This first-of-its-kind mission required incredible preparation and precision, and the team exceeded expectations on all counts,” said APL Director Ralph Semmel. “Beyond the truly exciting success of the technology demonstration, capabilities based on DART could one day be used to change the course of an asteroid to protect our planet and preserve life on Earth as we know it.”

Roughly four years from now, the European Space Agency’s Hera project will conduct detailed surveys of both Dimorphos and Didymos, with a particular focus on the crater left by DART’s collision and a precise measurement of Dimorphos’ mass.

To see the final images before DART’s impact, visit:

For more information about DART, visit:

DART is a planetary defense-driven test of technologies for preventing an impact of Earth by a hazardous asteroid. DART will be the first demonstration of the kinetic impactor technique to change the motion of an asteroid in space. The DART mission is in Phase C, led by APL and managed under NASA’s Solar System Exploration Program at Marshall Space Flight Center for NASA’s Planetary Defense Coordination Office and the Science Mission Directorate’s Planetary Science Division at NASA Headquarters in Washington, DC.

Two different views of the DART spacecraft. The DRACO (Didymos Reconnaissance & Asteroid Camera for OpNav) imaging instrument is based on the LORRI high-resolution imager from New Horizons. The left view also shows the Radial Line Slot Array (RLSA) antenna with the ROSAs (Roll-Out Solar Arrays) rolled up. The view on the right shows a clearer view of the NEXT-C ion engine.

The binary near-Earth asteroid (65803) Didymos is the target for the DART demonstration. While the Didymos primary body is approximately 780 meters across, its secondary body (or “moonlet”) is about 160-meters in size, which is more typical of the size of asteroids that could pose the most likely significant threat to Earth. The Didymos binary is being intensely observed using telescopes on Earth to precisely measure its properties before DART arrives. 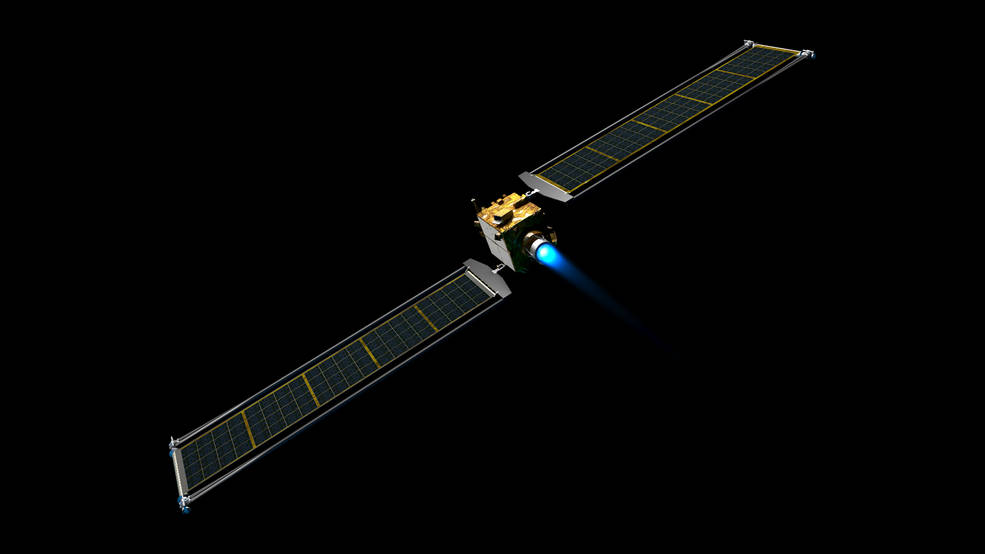 The DART spacecraft will achieve the kinetic impact deflection by deliberately crashing itself into the moonlet at a speed of approximately 6.6 km/s, with the aid of an onboard camera (named DRACO) and sophisticated autonomous navigation software. The collision will change the speed of the moonlet in its orbit around the main body by a fraction of one percent, but this will change the orbital period of the moonlet by several minutes – enough to be observed and measured using telescopes on Earth. 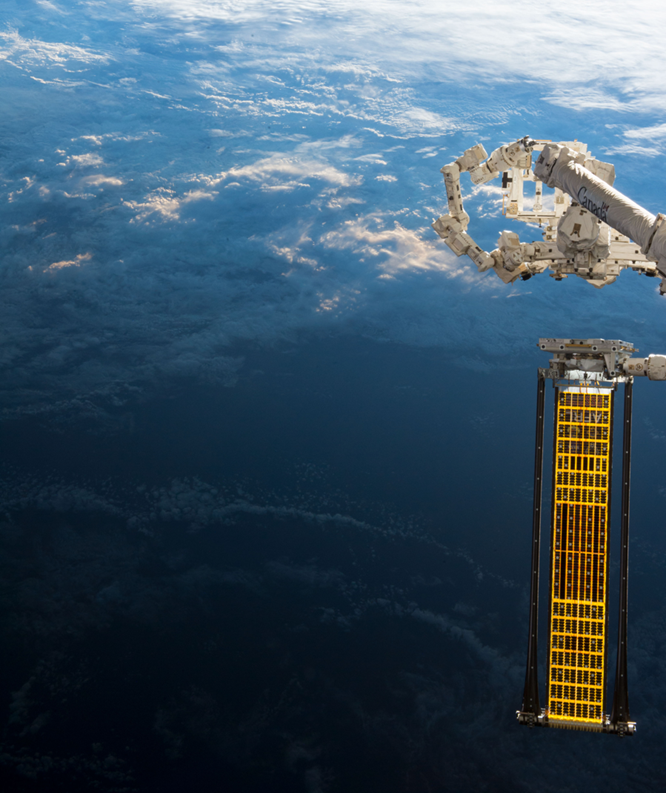 The DART spacecraft launch window begins November 24, 2021. DART will launch aboard a SpaceX Falcon 9 rocket from Vandenberg Air Force Base, California. After separation from the launch vehicle and over a year of cruise it will intercept Didymos’ moonlet in late September 2022, when the Didymos system is within 11 million kilometers of Earth, enabling observations by ground-based telescopes and planetary radar to measure the change in momentum imparted to the moonlet. 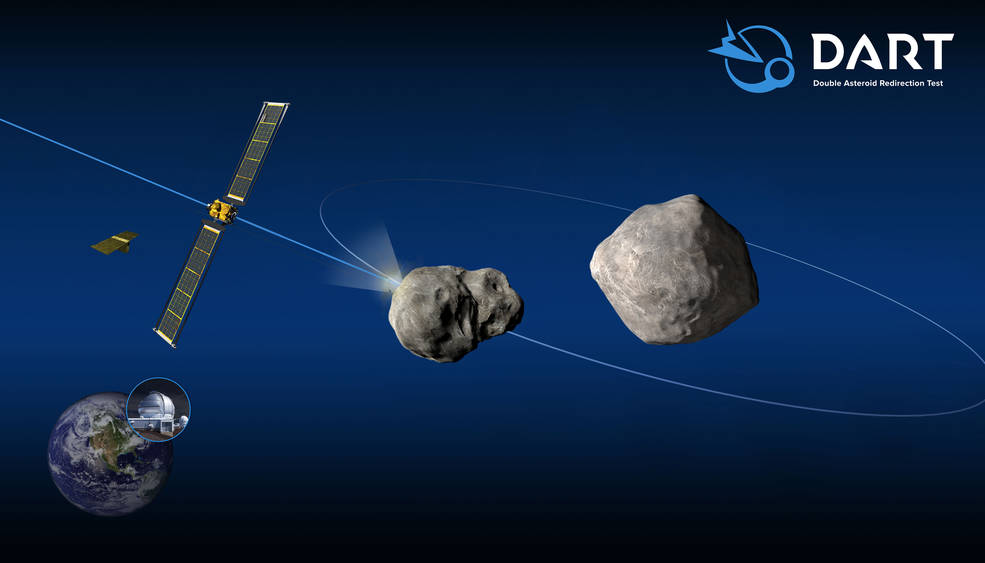 Schematic of the DART mission shows the impact on the moonlet of asteroid (65803) Didymos. Post-impact observations from Earth-based optical telescopes and planetary radar would, in turn, measure the change in the moonlet’s orbit about the parent body..

Is Earth Prepared for an incoming asteroid?

The chances of a large asteroid striking the Earth are remote, but because the consequences of such an impact are potentially catastrophic, NASA takes the possibility very seriously. To help counter the most likely potential threat, called Near-Earth Objects (NEO), the agency has released a 20-page multi-agency report outlining steps the US federal government needs to take over the next decade to respond to such an eventuality.

On February 15, 2013, an asteroid 20 m (66 ft) in diameter exploded over Chelyabinsk in Russia with a force of up to 30 times that of the first atomic bomb dropped on Hiroshima. Despite detonating at high altitude, the shockwave damaged buildings and thousands of people were injured by flying glass. That may seem nasty enough, but in 1908, another object 40 to 60 m (131 to 197 ft) wide blew up over Tunguska, Russia with a force of five to 10 megatons – flattening 2,000 km² (772 mi²) of forest.

What worries some space scientists and disaster relief planners is that these events aren’t anywhere near the top end of the scale. According to NASA, an asteroid 140 m (459 ft) in diameter would have an explosive force of 60 megatons if it hit the Earth. As to the upper limit, ask your local dinosaurs what the effect could be.

As part of a program to study the problem, in 2005 the US Congress instructed NASA to conduct a survey to find 90 percent of the NEOs that are at least in the 140-m range or larger. An NEO is an asteroid or comet that is on a trajectory that crosses the Earth’s orbit. Unfortunately, by 2017, the agency hasn’t been as successful as first hoped and will only find half the 140-m objects by 2033.

To help improve things, NASA, in coordination with the Office of Science and Technology Policy, the Federal Emergency Management Agency, and other federal agencies, has issued its report, “The National Near-Earth Object Preparedness Strategy and Action Plan.” Its purpose is to outline priorities to address over the next decade to best ensure an effective response to the threat posed by an asteroid impact is possible.

The plan will concentrate on five areas. These include: 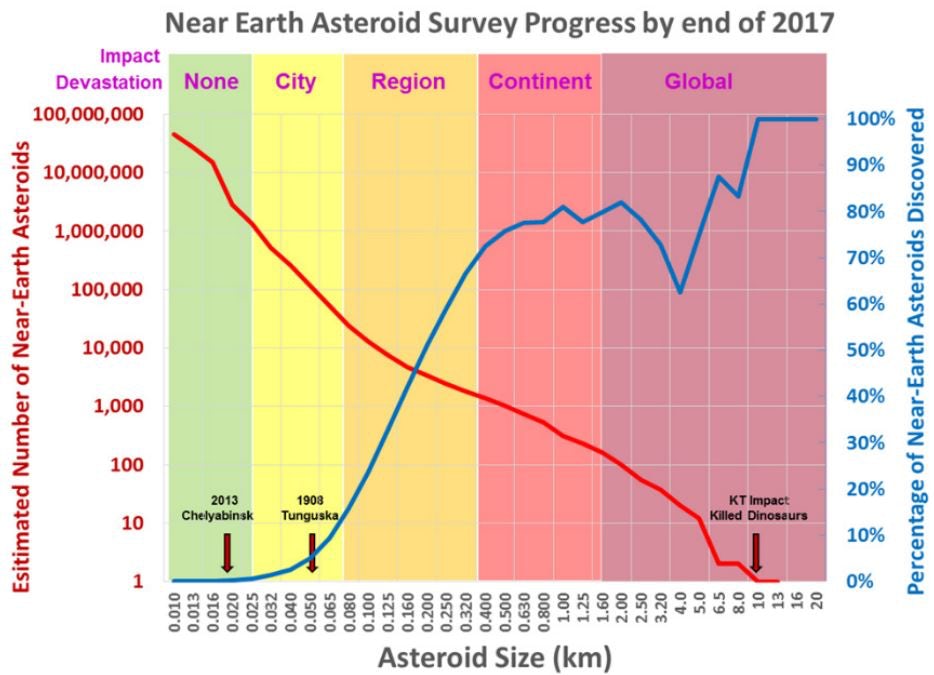 Near-Earth objects (NEOs) are asteroids and comets that orbit the Sun like the planets, but their orbits can bring them into Earth’s neighborhood – within 30 million miles of Earth’s orbit. Planetary defense is “applied planetary science” to address the NEO impact hazard.

The PDCO sponsors projects through its Near-Earth Object (NEO) Observations Program that employ a variety of ground and space based telescopes to search for NEOs, determine their orbits, and measure their physical characteristics. The PDCO is studying possible space-based telescope missions optimized for NEO search and characterization that could accelerate the discovery of the currently undetected NEOs.

The PDCO is responsible for providing timely and accurate information to the government, the media, and the public on close approaches to Earth by potentially hazardous objects (PHOs) and any potential for impact. If any PHO is found to pose a significant chance of impacting Earth (greater than 1 percent over the next 50 years), the PDCO will provide notification messages for NASA to send to the Executive Office of the President, the U.S. Congress, and other government departments and agencies.

The PDCO works with other government agencies to develop and update a National NEO Preparedness Strategy and Action Plan. The PDCO also provides expert input on the nature and effects of asteroid impacts to the Federal Emergency Management Agency (FEMA), so that adequate emergency response can be prepared in the event of a PHO impact that is not possible to avoid.